The entire campaign was written and produced by Gary DeMoss under edit supervision by the marketing staff at GEICO. Mr. DeMoss also lensed the spots as DP utilizing the Sony Cine Alta shot in 1080i 24fps.

The talent was awesome! Henry and his scooter was the hit of the garage.

Whether it is for a national advertising campaign, content for conventions and concerts, political spots under a deadline or documentaries, the AVID Media Composer suite can handle it all. Symphony allows for scene to scene color correction and imports or exports multiple codecs for today's multiple platform content distribution. Call Gary DeMoss for details @ 301.509.1383

Producing the first motorcycle campaign for GEICO was a daunting task but we welcomed the challenge. The entire campaign was shot on 35mm film processed at Colorlab in Rockville and transferred to HDCAM at Henninger.

The areial photography is accomplished utilizing a nose mount controled by joystick from the comfort of the back two seats. Motocycle speed on the Skyline Drive in the Shenadoahs was approximately 60 mph and the airspeed of the helicopter was 100 mph ... a coordinated effort between pilot and the AD on the ground.

The resulting thirty second spot above "Growing Riders" is my favorite among the group of spots we produced.

Paradise Films and DP/Director Gary DeMoss shot and edited a series of recruitment videos for the
​Washington DC Metropolitan Police Department (MPD) and West Street Productions
Below are the three primary videos. Winner of  the Bronze Telly for 2015. 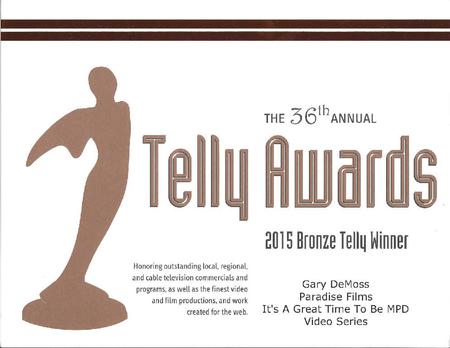 The second series Paradise produced for GEICO were shot on HDCAM utilizing the Sony Cine Alta and shot at 1080i 24fps.The challenge for this spot was that the talent on the morotcycle had never been on a motorcycle, let alone being able to drive away on cue after delivering her lines.

So we built a sled to guide the motorcycle in and out of frame. The resulting spot was a great success! 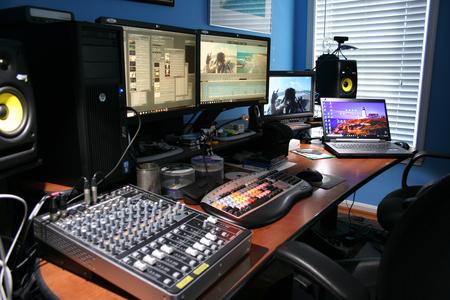 I'm not certain either, but this story was based on an actual case in Pennsylvania. The peice was to be aired on a short-lived series called "Extremely Weird" on NBC.